See you next week

I’m heading out of town to interview for grad school, and I doubt there will be time to write here until next week. After all, real life trumps hobbies, unless my advisor really wants to know if he should buy an iPad or something.

I had no idea webOS was this awesome.

I’ve been combing through Brickshelf lately in search of Aquanauts MOCs. The underwater theme has been my favorite ever since I received a Crystal Explorer Sub for Christmas 1995, but it’s been sadly neglected by the AFOL community lately. Aside from a clever Aquanaut Speeder Bike last year, Aquazone is all but abandoned on Flickr. Thankfully, there was at least one builder I found on Brickshelf cranking out truly stunning Aquazone material as recently as 2008. The photo quality is absolutely abysmal by today’s standards, but the included CAD renders are still as impressive as ever. Among a solid portfolio of submarines of all sizes, modular colonies, and enclosed shipyards, the monorail base stands out. The building techniques aren’t terribly advanced, but somehow every MOC seems to perfectly capture the ’90s LEGO aesthetic that I love so much. Just about any of these could be official sets if price and piece count was no barrier.

Here’s hoping that Aquazone makes a comeback among AFOLs, or else I’ll have to be the only one still making submarines.

Mashable tells us that Google has compiled an algorithm to rank the “funniest” videos on YouTube. Apparently, it simply tallies the quantity and quality of “lol” comments a video receives. Preference is given to capitalized “LOL”s, repetitive “looooool”s, and exclamation points.

Google does a lot of stuff right, but this is not one of them. For a look at their utterly pathetic “funniest videos in the world,” head over to their YouTube channel. Machines, so far, have nothing on human comedy.

A Trip to the iFactory

ABC’s Nightline will be airing an exclusive look inside Foxconn tonight at 11:30/10:30c. Invited by Apple for an unlimited tour, this promises to be the best look yet at the massive factory-cities that produce the world’s consumer electronics. Nightline is claiming that Apple put no barriers on access or filming, so hopefully we’ll get a truly unbiased view of the Chinese electronics industry. The air time is a bit late, but I know I’ll be watching.

Edit: In case you missed the half-hour show, it’s available to watch online at ABC’s website (unfortunately the video is US only). 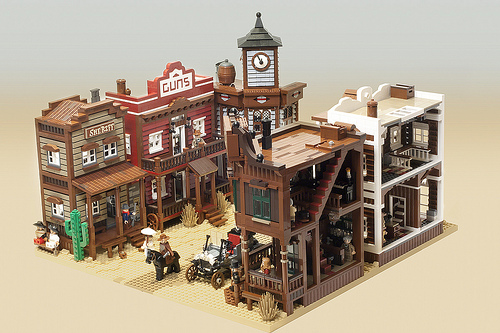 With Minecraft Micro World emerging successfully from CUUSOO, the AFOL community has turned its attention to a new project. Many of the bigger websites have thrown their support behind marshal banana‘s Modular Western Town as their model of choice. This is a very attractive series, reminiscent of the Wild West theme from the late ’90s and the modern Modular Building sets. The plan is to release the detailed buildings one at a time like the Modulars, allowing buyers to customize their towns as they see fit.

The project currently stands at just over 4,000 supporters, but it keeps increasing at a steady pace. The AFOL community is hardly as united as the Minecraft supporters, but hopefully it gains enough votes to enter production. Many people would love a new western set, especially one with this much detail. Cast your support behind the set on CUUSOO, and check out detailed photos on Flickr

LEGO has just announced the end result of their CUUSOO partnership with Minecraft – a microscale world built from 1×1 plates and tiles. The set certainly looks like Minecraft, right down to the Steve and Creeper figures they include. The set is already available for pre-order at Jinx for $35, shipping in summer. Even if only 10% of the people who voted on CUUSOO actually buy one, I can see this making some decent money.