Speaking of All Things D interviews, Tim Cook just gave a pretty good one himself. Here’s the transcript from Macworld, and some select clips from the All Things D site. After that, take a look at Dan Frommer’s astute analysis of the main talking points.

It sounds to me like Apple is in good hands, but Walt and Kara pushed pretty hard on the Apple TV rumors. Tim doesn’t yet command the respect that Steve Jobs demanded, and I doubt he ever will. Not that a more approachable CEO is necessarily a bad thing.

The All Things Digital conference is sort of an unofficial tech bigwig interview fest, when Walt Mossberg and Kara Swisher grill industry titans on upcoming products and their companies’ performance. Apple is no exception, and Walt’s good relationship with Steve Jobs led to six appearances from 2003 through 2010. As a memorial to the extraordinary CEO, All Things D has released full video from each appearance for free on iTunes, including Steve’s memorable dual interview with Bill Gates. Download them here, but be warned: the video files are quite large and take some time. Luckily, streaming is also an option.

The Dawn of Fanboys 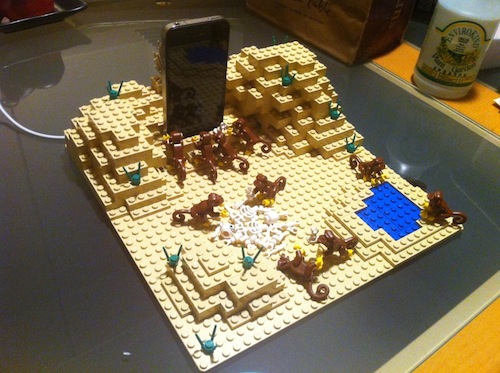 Genius iPhone dock portraying the iconic “Dawn of Man” scene from 2001: A Space Odyssey. If I hadn’t chosen the white iPhone, I’d probably build a smaller version for myself. (via Daring Fireball)

The caption at imgur claims this was built by “a friend’s husband,” who I would guess either reads io9 or is Jason Allemann. The MOCs are almost identical, except for small differences in monkey posing and shrub color/placement. 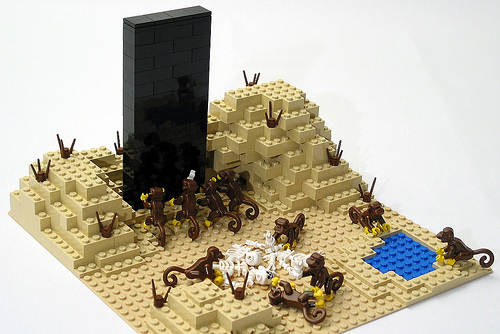 Thomas Langenbach, a multimillionaire VP at SAP Labs in Paolo Alto, sold LEGO on eBay as a side business. His username, TomsBrickYard, had a great rating and sold over 1400 sets.

Problem is, those sales were built on a scam. Langenbach bought his sets at Target before reselling them at near market value. The twist is that he created his own fake barcode stickers to paste on boxes and lower Target’s prices. When a cashier scanned his purchases, everything would ring up substantially below MSRP, and he earned a healthy profit. Needless to say, he got caught and was arraigned today.

Who knows why a millionaire software executive would scam Target for cheap LEGO, but it certainly makes me more wary of buying online. I like to think that the AFOL community is above-ground and honest, but Langenbach was about as big as it gets in the set collecting world. Thankfully he wasn’t on Bricklink, where I buy my parts.

Have a Mac? Want to share important files securely, but don’t have the time or inclination to figure out how? Then get DropKey from WellRedApps for free on the Mac App Store until May 20. Just drag any file you want to encrypt into your menubar, and then send it to anyone in your Address Book also running DropKey. See a quick video describing how it works here.

It really couldn’t be any simpler. This app came out about a few weeks ago, and I thought about buying it. Now that it’s free, there really is no excuse if you need to protect your files. 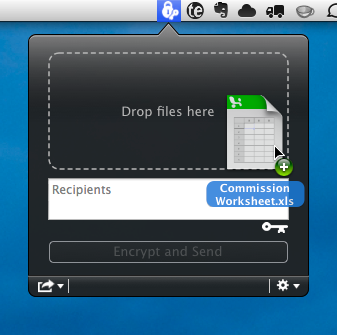 PBS’s Off Book series takes a look at LEGO art with this episode, featuring Sean Kenney, Alex Kobbs, and Nathan Sawaya. The scale and quality of work here is exceptional, including the stop-motion animation. I’m not usually a fan of brickfilms, but Alex does a great job. The artists each have unique reasons to use LEGO, but you can feel their common enthusiasm and respect for the brick.

Mat Honan at Gizmodo paints a compelling picture of Flickr’s increasing irrelevance. It’s not a pretty story, though the trend is clearly not applicable to the LEGO community. It seems like every day I see more great activity in the AFOL Flickr groups. Yahoo’s photo service might be dead to technologists, but compared to Brickshelf and MOCpages (and even LUGNET), Flickr is a dream come true. The clean design and robust commenting system make MOCs look their best and easy to find. It’s troubling that Yahoo, the world’s least competent web company, is holding the reins, but I hope Flickr has some life left for the LEGO community. There’s some truly great work being displayed there, and most builders have little reason to switch services. Knowing how long AFOLs have held onto LUGNET after it became largely irrelevant, I wouldn’t be surprised if Flickr sticks around for a long time yet.

On the other hand, I guess it’s telling that I made a Pinterest account today to try out their social photo features, but haven’t updated my Flickr stream with a new MOC since February.

The official CUUSOO blog now details what topics are out-of-bounds for submission, which makes a nice follow-up to my comments from last night. As expected, their review process is weeding out most inappropriate material submitted since March 29th, but they list taboo topics anyway:

Understand that we will not produce products that are related to these topics:

• Alcohol in any present day situation

• Warfare or war vehicles in any situation post-WWII to present

The determination of how a project fits these above standards will be at our discretion. There’s always a chance that something will be approved, then removed from the site after being reviewed in greater depth, or not approved during the LEGO Review stage for projects that achieve 10,000 supporters.

Very interesting that WWII (and every earlier war) is fair game, but death, killing, and blood are not. This does leave the door open for a nice WWII plane or tank set that would probably sell quite well. The final takeaway is to play it safe: if you think that your set might not be appropriate for kids in any way, then LEGO probably isn’t interested:

Conversely, there are plenty of LEGO product ideas that appeal to older fans and do not skirt these lines. Our advice is to stick to what’s safe. Remember, some things are more appropriate for you to build with your own bricks and share online yourself. There are many great ideas out there, but not all make appropriate official LEGO products.

A reasonable stance, and hopefully one that will improve the quality of submissions all around. I must admit that I’m impressed by how well LEGO is handling CUUSOO, and how smart they are to fill in the gaps when they perceive a problem. Seems like they are in this for the long haul.